Are You Confused About Muscle Imbalance? 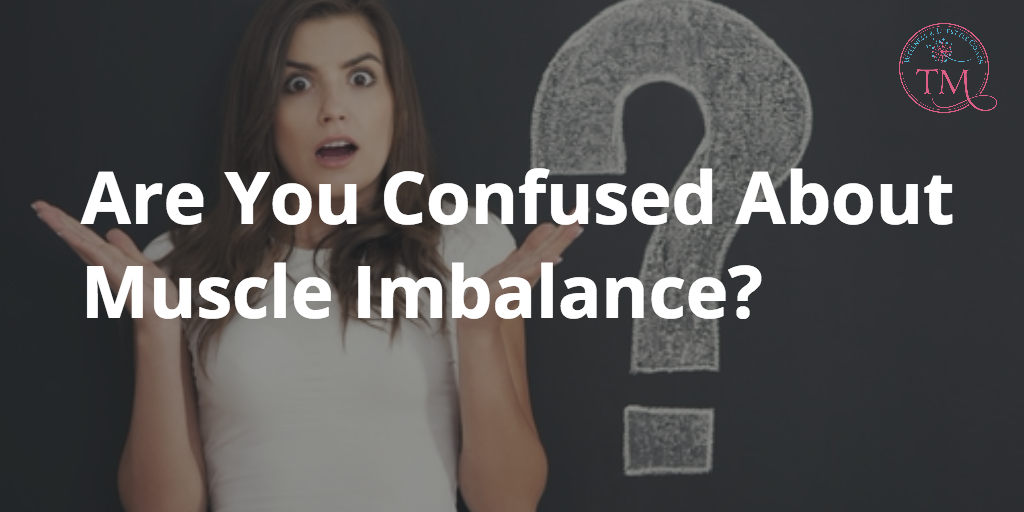 Recently I was working with a client and she told me that she works her entire body EVERY workout because she was afraid of muscle imbalance.

I was surprised because most people don’t give it a second thought. Not only that, she was making things a little more difficult for herself because of that fear.

Why Should You Care?

Our bodies are designed so that opposing muscles help support the spine and keep us in alignment. When you consistently work one group of muscles without putting an equal effort into the opposing muscles, you’ll start throwing off your alignment.

When your alignment is out of whack, you’re susceptible to overuse injuries. Not to mention that the weaker, neglected muscle probably has an important duty…like protecting your knee joint. (This article from SportsMD gives a little more background.)

If you run all the time and don’t do any exercises to strengthen your quads, you could be asking for trouble. I’m sure you’ve seen great examples of muscle imbalances at the gym too.

Ever seen the guy with the huge muscular chest who walks around with his shoulders curled forward and his hands on his hips like he’s trying to flex for you? Guys love to bench press. It’s a right of passage for how strong they are, but if they don’t work out their back as often, they’ll look out of proportion.

Another favorite guy I mock at the gym is the guy who does shrugs all the time, so he gets those big neck muscles…only he doesn’t work on his shoulders as much, so now he looks like a Christmas tree. NOT sexy, dude!

I also know several people who will lift weights for their upper body, but don’t lift legs because they do cardio of some type…running, hockey, etc. It shows! (Hello Chicken Legs!)

They may be surprised to know that it can actually benefit them in their sport to lift weights for their legs.

How She Was Making it Difficult

Unless you’re doing a crossfit style workout, it can be time consuming to lift weights for your entire body. It’s hard enough to squeeze in gym time when we’re juggling a career, family, home, and a social life.

If it feels like a time consuming effort, you’re more likely to blow it off more often. And that’s not good!

There’s no reason as you progress why you can’t break your body into smaller manageable parts. You’ll get more out of it and start to see REAL CHANGES!

Every time you work a muscle, make sure you work out the opposite muscle before you work the first muscle again. Easy enough, right?! (Tweet that!)

If you’ve already been guilty of doing this and now notice some imbalances of your own, here’s a great article from Men’s Health with exercises to help 4 common imbalance problems.

Tell me in the comments below how you think you’re imbalanced. I can help! And if you have fears about weight training, reach out!